The Best Way to Wrap and Store Rugs

Many rug owners do not realize the damage that can be caused by improperly storing their rugs. There are a few things to consider before you roll them up and put them away. As rug care professionals, we need to know that not all situations are the same, what the best wrapping method for each situation may be, and what might happen if a customer’s rug is wrapped improperly.

This will remove soils, odors, and other pollutants from the fibers that may lead to dry rot if left alone. Thorough drying in a temperature controlled and humidity controlled room will ensure that no damaging moisture is left in the rug. Also, wool moths are attracted to undisturbed, soiled wool. Vacuuming is not enough.

Roll the rug up instead of folding or “baling” it.

Roll the rug from one fringe end to the other, rather than from long side to long side. Also, rolling the rug on a cardboard tube or pvc pipe of some kind is preferable to just rolling. This way, there will be no undue stress put onto the foundation of the rug. These stresses may cause foundation cracks to appear, and permanent creases in many types of rugs. 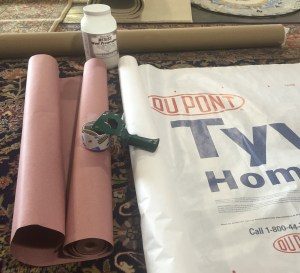 Consider where the rugs are being stored, for how long, and how they should be wrapped.

Wool rugs especially, draw moisture right out of the air. So it’s very important to store the rugs in a cool, dry place. If storing for only for a short time, up to a few weeks or so, brown Kraft paper wrapped around the outside of the bundle should be enough to keep the rug dust free until it’s ready for use. If the rugs are being stored for a long time, several months or even years, wrap in brown Kraft paper first, then wrap in Ty-Vec, a breathable, hard to puncture wrapping material. Wrap and seal the entire bundle, including the ends. In either case, treating the textiles with a moth repellent is suggested. Never wrap a rug in plastic, as it will create a greenhouse-type atmosphere where mold and mildew could grow, should the bundle ever become damp. Even plastic that has been punctured or perforated does not allow for enough air to come in, and moisture to escape.

Keep the wrapped rug off the floor, and away from an exterior wall.

Eliminating contact with an exterior wall or the floor ensures that condensation will not build up along the length of the bundle where mold or mildew could begin to grow. Keep the bundles laid out flat on pallets, on a table, or across some chairs. Also, do not stand the rugs on their end. When rugs stand on their end, they may become crushed, sometimes permanently.

Sometimes rugs need to be folded for shipping.

If a carrier insists on having the rug folded up for transport, it’s ok to do this as long as the rug does not have dry rot and the person receiving the rug is able to open it up right away, inspect for fold damage, and roll it up properly once it arrives. The longer it remains folded, the longer it will take for any creases to come out.

← Consulting Testimonial from Grass Valley, CA Q: What should I have my office staff do when the phones are slow? →

Hours
Mon. - Fri. | 9 am-5 pm EST
Evenings or Weekends
By Appointment Only