Before you attend any Rug ID class, there are a few basics you need to have well learned so that you don’t fall behind in class. The first of those is basic rug construction. The proper names and functions of what’s on the inside of your rug is probably the best place to start, and warps and wefts are where we’ll begin.

When a weaver begins to make a new rug, he or she starts by stringing the warp yarns onto the loom. Once the loom is strung, the weaver begins to tie colored wool onto those warp yarns one knot at a time. These knots make up the fuzzy pile (front) and flat (back) side of a rug. Each knot is wrapped around two warps. (It’s important to realize that each knot has two halves.)

The method the weaver used to wrap her knots might be symmetrical (both warps fully encircled by wool) or asymmetrical (only one warp fully encircled with wool), depending on the region she lives in or was taught in. When the weaver completes a horizontal row of knots, he then passes a shuttle with the weft yarn over and under each warp. Most often, more than one warp is in play. These warp yarns pass through the warps, wrap around the terminal (end) warp, and then back again. Then it’s combed down into place, effectively locking in the row of knots. This process is repeated until the rug reaches the desired length.

Barring any harsh chemical or extreme treatment, rugs constructed in this way should last decades. 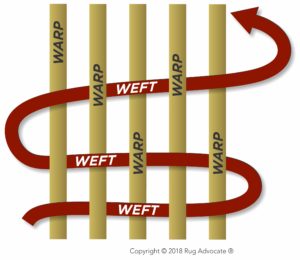 These rugs start life much the same way as their knotted counterparts, but instead of tying knots onto the warps and locking them in with wefts, the wefts of woven rugs are actually the colored wool you see and walk on. The wefts are not hidden inside the rug. Instead, they are exposed and lay flat.

Because flat woven rugs are constructed in this way, the life expectancy of these rugs is much shorter than that of a knotted rug. These have no pile to wear down. Rather, the weft yarns themselves take the brunt of the wear, and eventually fray enough to create a hole.

← Q: What should I have my office staff do when the phones are slow? Liability Disclaimers – What Should They Say? →

Hours
Mon. - Fri. | 9 am-5 pm EST
Evenings or Weekends
By Appointment Only